This post and recipe may contain affiliate links. As an Amazon Associate I earn from qualifying purchases. Please see the Disclosure Policy for details.
Recipe Below Print Recipe

These Cinnamon Rolls with Maple Syrup Glaze are made with soft, enriched dough that is swirled around delicious cinnamon and sugar.  A maple syrup glaze finishes off the cinnamon rolls and adds a hint of caramel and butter flavor.

I love cinnamon rolls!  But, who doesn’t, right?!  They usually appear on the breakfast menu around the holidays.  Though, before I started baking, they were the cinnamon rolls that came in the popping tube.  You know the ones.

These Cinnamon Rolls with Maple Syrup Glaze are better.  And yes, I am biased. 🙂

Are They Cinnamon Rolls or Cinnamon Buns

I have come across a couple of different names for these delightful breakfast treats.  Until just recently, I thought they were just cinnamon rolls.

Now that I have become slightly addicted to British Baking Shows, I see British bakers refer to them as ‘buns‘.  Regardless of what they are called, the preparation is the same.  The dough always starts as an enriched dough that is soft and risen with yeast.

The only difference I have found in researching, and watching, different recipes – the filling flavors and glaze.  Which, why not make it your own?  Once you have the base dough recipe, the flavor varieties is somewhat endless!

What Is Enriched Dough

So, I said the words enriched dough and you may be wondering what the heck is an enriched dough?  Unlike other yeast breads like a sandwich loaf, or French bread, an enriched dough has added ingredients that make is soft and tender.  Perfect for sweeter bread recipes like cinnamon rolls.

Challah and Brioche are other types of enriched dough.  Cinnamon rolls are traditionally made with Brioche dough. The difference between this recipe and a Brioche recipe is that Brioche takes longer to knead, and it should be proofed overnight.

I have every intention of trying to make Brioche, but I have yet to get in the mental space for the time it takes to make it.  Anyway, enough about Brioche …

A traditional cinnamon roll has a cinnamon sugar filling.  We are not deviating from that for this recipe.  However, I have provided an option for a refined-sugar free version.

I use coconut sugar in a couple of other recipes – Peach Caramel Cake, Oatmeal Nutella Sandwich Cookies, and Peach Monkey Bread Muffins.

I find that coconut sugar does not taste like coconut.  It has a more of a rich, almost cinnamon-spicy flavor.  Which makes it a perfect replacement in a cinnamon sugar filling.

The filling for these Cinnamon Rolls with Maple Syrup Glaze is super easy:

And because these are your Cinnamon Rolls, you can add a variety of other flavors, spices, extras.  How about trying a fruit flavored cinnamon roll like these Strawberry and Chocolate Cinnamon Rolls!?

To give the glaze structure, we use a bit of cream cheese to thicken it up and add another layer of flavor. 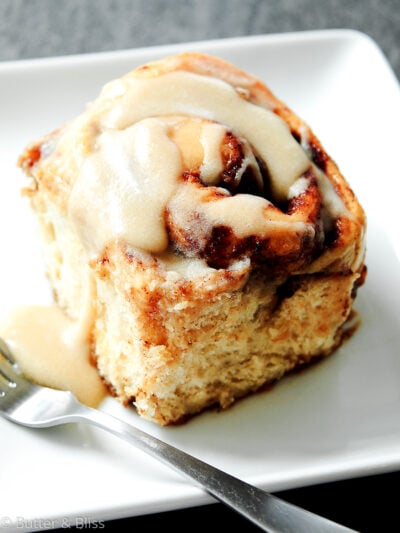 Yield: 12 Cinnamon Rolls
These Cinnamon Rolls with Maple Syrup Glaze are made with soft, enriched dough that is swirled around the perfect mix of cinnamon and sugar.  Maple syrup glaze finishes off the cinnamon rolls and adds a hint of caramel and butter flavor.
Prep30 mins
Cook25 mins
Proof1 hr 30 mins
Total2 hrs 25 mins