Just in time for Fall – Apple Brown Sugar Hand Pies with Cinnamon Brown Butter Glaze!  These mini hand pies have a delicate flaky crust and are filled with brown sugar and caramelized apples.  Then they get topped off with a spicy cinnamon brown butter glaze!  Perfect for breakfast or dessert!

I can’t decide if I like the crust, the filling, or the glaze of these hand pies better.  Either way, I will say that this is the best pie crust I have ever had.  Now I must disclose that statement by saying the crust is light and flaky.  Whereas, there are pie crusts that are a little more sturdy, and less flaky.  But whichever side of the pie crust fence you are on, trust me when I say this one is delish!

The secret to this hand pie crust is the butter (obvi) and the vinegar.  The vinegar makes it tender and the butter creates the air pockets in the dough.  Which in turn yields a flaky crust.  I have also used this pie crust recipe for our Cherry Almond Galette For Two, and Individual Peaches and Cream Pies.  I promise, this pie crust won’t dissapoint!

The filling for the Apple Brown Sugar Hand Pies is made up of, well, apples and brown sugar.  And it doesn’t get any more complicated than that!

What apples should you use for apple pie filling

I used Red Delicious apples for this recipe.  I like their sturdy texture and that they are more sweet than tart.  However, there are other apples that you can use for hand pies.  But before you go on read the list, I must state that I believe the apples you use is totally a matter of personal preference.  See, I don’t care for Granny Smith apples (too tart for me!)  But you will notice that almost any website will say they are the best for baking.  Regardless of that, I still don’t bake with them (yet 🙂 )!

Now if you want to do your own research on apples and baking, I would recommend the tried and true Betty Crocker for some advice.  🙂

How to prepare the apple pie filling

I do recommend cooking the apples with butter and sugar first.  This will tenderize them and impart yummy flavor before baking.  Although, do not overcook the apples – you don’t want them to turn to mush when they are baked.  I say 3 minutes, 5 tops in the skillet and you’re done!

And to get even more goodness in your hand pies, the brown sugar and flour mixture makes for a creamy texture and pairs beautifully with the apple filling.

Making brown butter is really pretty easy.  And once you’ve made it, you will want to use it for everything!  Given the amount of butter in this recipe (1 tablespoon), it will not take too long to brown.  So I recommend not leaving the skillet’s side while the butter browns, and swirl the skillet around so the butter melts evenly.  As it browns, you will also start to see little brown flecks – which is just more flavor!

Finally, adding the cinnamon to the warm butter blooms the spice.  Which is fancy for elevating the natural flavor of the cinnamon.  Which then gives you a great spicy cinnamon flavor for your glaze!

Now the hard part – whether to eat these for breakfast or dessert! 🙂 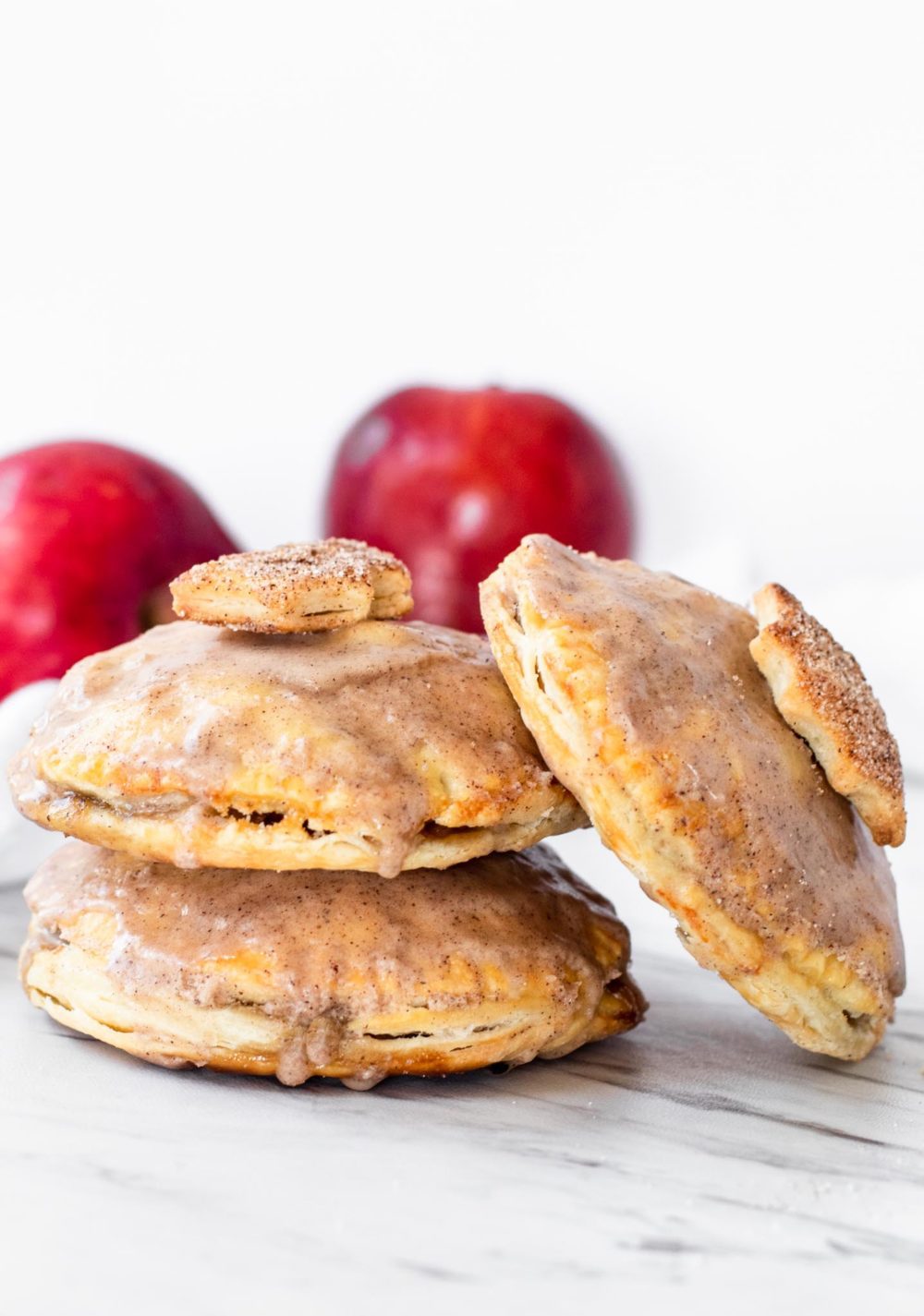