A Small Batch of Vanilla Cupcakes that are fluffy, moist and topped with chocolate chip buttercream.  To make it even better, the center is filled with a creamy chocolate pudding filling.

I think cupcakes are a PERFECT recipe for small-batch desserts.  Even for a small family, it is nice to be able to enjoy the fresh cupcake for dessert.  And because these have a filling in them, you don’t want extras sitting around for too long.  Otherwise, the laws of food (this isn’t really a thing), will start to alter the texture of your beloved little cupcake.  Translation:  they can get soggy.

The other thing I love about small-batch cupcakes is you can try multiple flavors, again without the concern of what to do with the leftovers of flavor #1.  They are fast and easy to make, and once you get accustomed to making the smaller batches, you can make them in one bowl.

There is no magic about this cupcake filling.  It is just chocolate pudding.  Well, maybe that is magic because it is pudding.  My point is, you don’t have to have some special texture or consistency to shove something in the middle of the cupcake.  These cupcakes are sturdy enough to hold anything in and on them!

I’ve given you a bonus with this pudding recipe.  You are going to make more than you need to fill four cupcakes.  So, you are welcome.  Put the extra pudding in a fancy bowl, top with some whipped cream.  And POOF!  Now you look like a rockstar because you slaved over the stove and made TWO desserts!  You’re welcome 🙂

Please do yourself a favor and practice making pudding – any flavor – at least once a week.  I promise after about the second/third time you will be such a pro that you won’t need to follow a recipe, and you will be able to make it from start to finish in 10 minutes.  Plus the chill time, of course.

Mini chocolate chips are just too cute.  Put them in and on some buttercream frosting, and they turn into supermodels.  Sure, you could do a plain ‘ol vanilla buttercream.  But you’ve gone through the expense of putting the dreamy chocolate pudding in these cupcakes.  So why not accessorize them accordingly?

So, there you have it!   A lot of words for some pretty simple, yet perfectly worth it, small-batch vanilla cupcakes!! 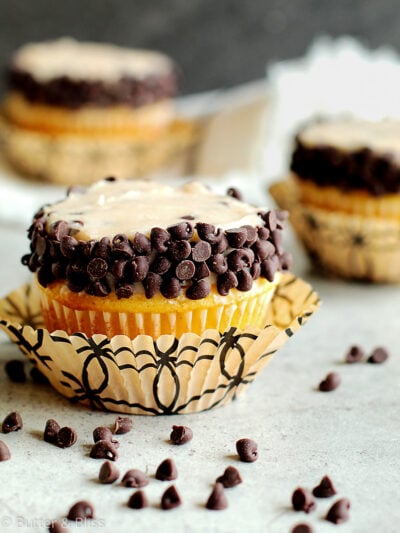 I’m Erin – a self-taught home baker and small batch baking enthusiast. Butter & Bliss is a growing collection of my recipes for baked goods and sweet treats.